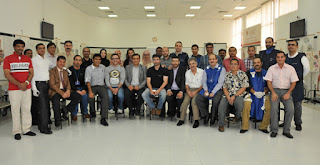 Only two candidates at a time, directly under my supervision, you will get chance to have hands on and observe all the procedures required for pain physician to learn. This course will be suitable for beginners and also advanced learning for those who want to appear in fellowship exams.  We normally do 10 to 20 procedures in a day. These include simple root blocks to advanced pain procedures including neuromodulation, USG blocks, RF Ablations, Trigeminals, SP blocks etc Please note, our pain center is the busiest when compared to any clinic in India or In the world.  COURSE DIRECTOR   Dr Tariq A Tramboo MD, FIPP Chairman TWPS Chairman Spineloop LA. USA. Twitter: http://www.twitter.com/tariqtramboo a Venue: Khyber Medical Hospital Srinagar, kashmir, India Workshop fee: 1700 USD This will include 10 days course. for queries please contact : 09797212222  or Email: taria363@yahoo.com
3 comments
Read more

November 18, 2016
THIS PAGE IS FOR PATIENTS OR DOCTORS WHO ARE FAMILIAR WITH CRPS .  What causes CRPS is not known. In most of the cases it is the trauma. When physical Trauma is associated with  psychological trauma ---- chances of CRPS go up significantly. Example:  A Patient who whom I know lost his son in the accident and also injured his arm. He developed one of the worst forms of CRPS. We have divided CRPS into three categories 1. post traumatic 2. non traumatic It is important for all physicians to understand that Crps is in the brain and not in the limb. The pain will remain even if you amputate the limb. Dr Tramboo MD.
4 comments
Read more

November 16, 2016
Treatment for CRPS/RSD has to be individualized. Medications used for CRPS are usually meant to deal with neuropathic pain. Treatment for CRPS may be difficult. The goal of treatment is to seek pain relief and to restore function. CRPS can not be treated but effectively managed.  Treatment modalities are continuously evolving as research and clinical practice provides new evidence and insights. For example it was once thought that sympathetic nerve blocks were a diagnostic tool and a curative procedure. This has been disproven over time. Some current treatment methods that may work for you are: 1.Use of anti-convulsants  2. Use of TCA antidepressants 3. Physical and occupational therapy (including graded motor imagery and mirror box therapy), the anesthetic Ketamine, steroids in the acute phase, nerve blocks, spinal cord stimulator, warm water therapy, calmare therapy, hyperbaric oxygen therapy, use of opiates (may be considered controversial), bisphosphonates (study starting
3 comments
Read more

November 16, 2016
We Offer the most advanced Neuro Modulation for limb Crps, which includes peripheral lead placement. Trial of 3 days will be conducted before permanent implant.   email for further query:  taria363@yahoo.com
2 comments
Read more

November 16, 2016
What is complex regional pain syndrome? Complex regional pain syndrome (CRPS) is a chronic pain condition most often affecting one of the limbs (arms, legs, hands, or feet), usually after an injury or trauma to that limb.  CRPS is believed to be caused by damage to, or malfunction of, the peripheral and central nervous systems.  The central nervous system is composed of the brain and spinal cord, and the peripheral nervous system involves nerve signaling from the brain and spinal cord to the rest of the body.  CRPS is characterized by prolonged or excessive pain and mild or dramatic changes in skin color, temperature, and/or swelling in the affected area. There are two similar forms, called CRPS-I and CRPS-II, with the same symptoms and treatments. CRPS-II (previously called causalgia) is the term used for patients with confirmed nerve injuries. Individuals without confirmed nerve injury are classified as having CRPS-I (previously called reflex sympathetic dystrophy syndrome).
1 comment
Read more